I had estimated about 53km and about 1 000 height meters between where I was and my final destination, the. Basilica in Santiago de Compostela. Arriving to Melide on day 7 was good and Ieft me with 3 days to complete my expedition.

Sabrina, was going to arrive in the evening by car, so if possible I wanted to meet up with her in Santiago de Compostela. However, If I felt that I would need to stop on the way, then there was always Saturday to make the last distance. I had a plan.

I had sore muscles, I was tired and the feet needed attention. I cleaned the area around the blisters and put on Compeed. Put on a clean t-shirt, a pair of clean socks and switched to shoes more suitable for both trail and asphalt running. I felt the energy as I set out. 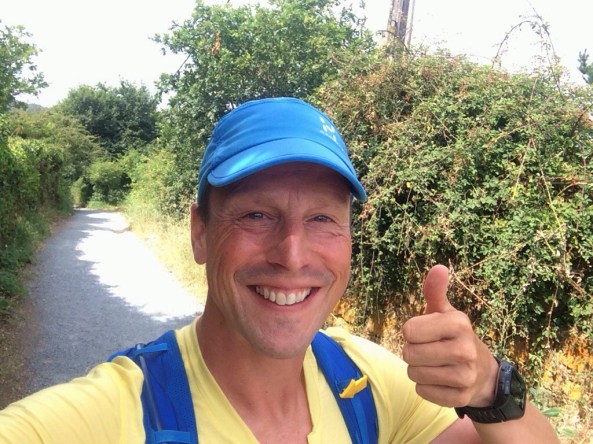 From Melide the camino connected with the French Way (the most famous one) and I quickly found myself on a new type of trail with wider and much more prepared paths. 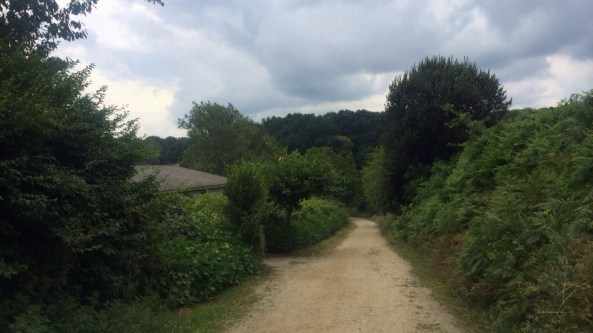 More people , groups and bikers on the road here compared to where I had been running the previous days on the Camino Primitivo. Also more possibilities to eat and drink on the way. 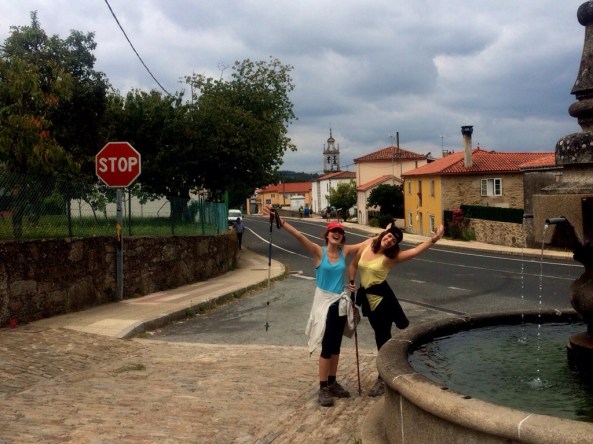 The weather was good, potential rain and cool air. Perfect for running. i pressed on and focused on covering the first 14km to Arzúa, where I had decided that would stop for something to eat. 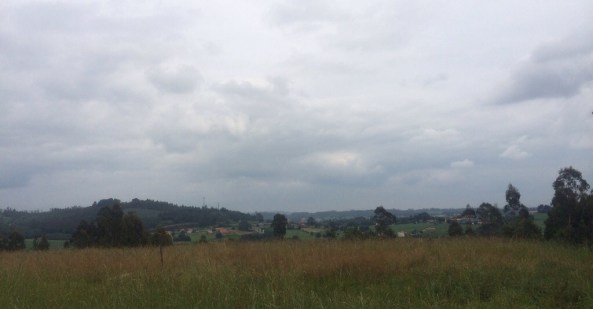 The forests I passed all had a similar look to them. Felt like being in a mythical place or in a fairy book. Then every now and then someone offering something to drink or wishing me a good day. 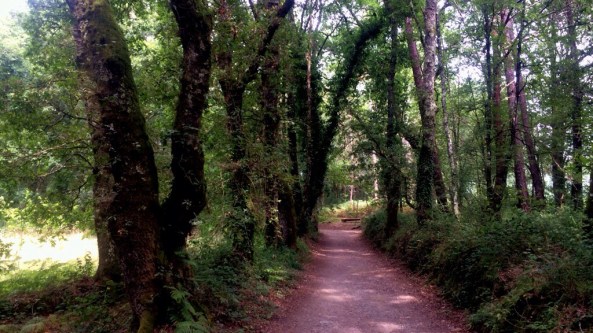 I stopped as planned to have lunch. Legs were tired and the feet too. i set out to my next check point, O Pedrouzo, 19km away. On the way a biker passed me and then a second one. A minute or two later I heard a runner behind me. He came up next to me and we started talking while running. As it turned out, His name was Victor and they were from Brazil and the bikers, Thais and Raphael, were his support team. Their team is called Correndo no Mundo. Really friendly guys and it was good to have someone to run with for a while. 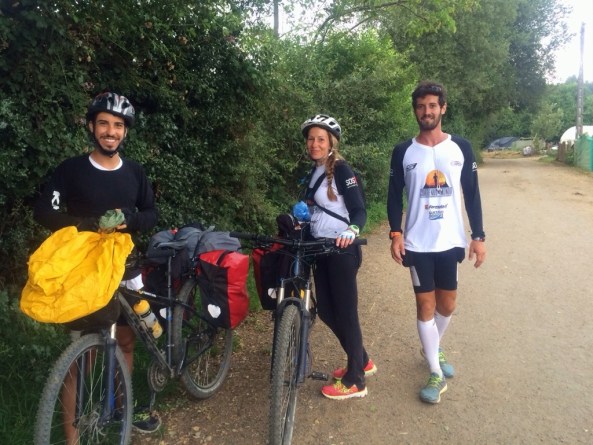 They stopped, we exchanged contact details, wished each other the best and then I continued onwards. More forest and the path winded up and down over the hill sides. 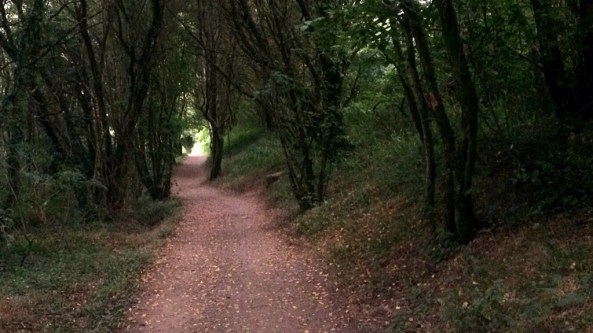 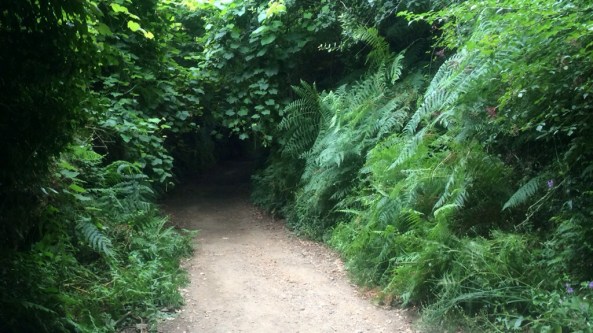 I kept going, walking uphill, running downhill and keeping the running at low intensity. Mixing the two was good for the legs and for my head. I was getting tired and my thoughts were moving slower and slower. 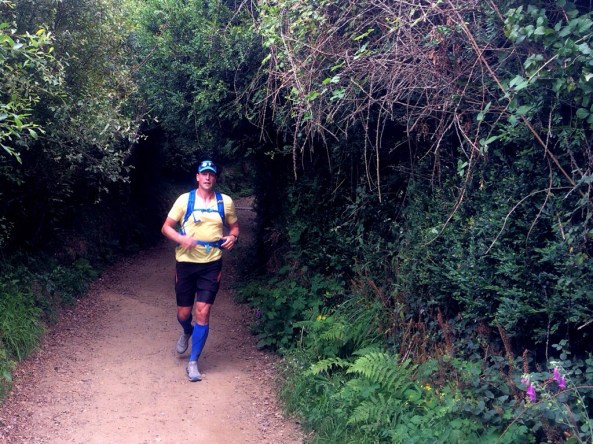 Drinking and adding energy by eating dates and nuts became the routine. I kept smiling and going with my focus set on reaching my target. 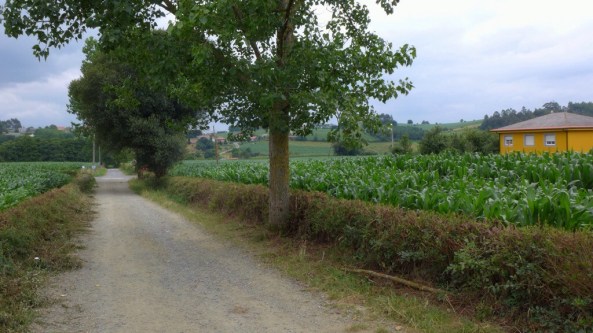 I continued and i could feel that the rain was about to start. I stopped to put on my rain jacket. All the other things in the backpack were inside a waterproof bag. The air was getting much cooler. 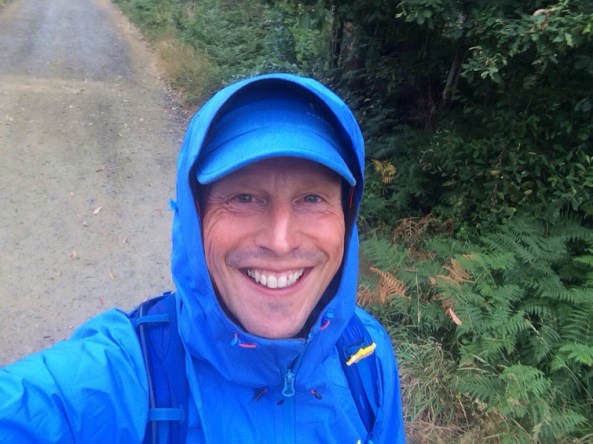 I continued in the rain and passed another hillside with less than 10km left. More fields of corn. I passed the airfield of the city and continued. Not far now!’, I thought. 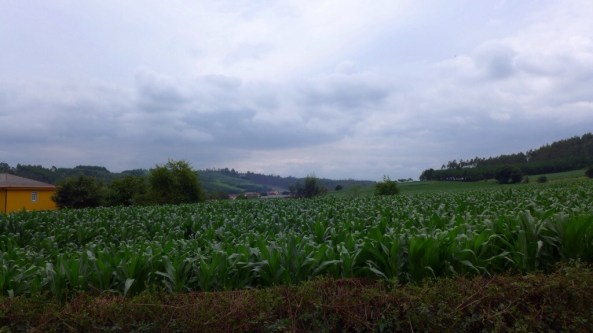 But the running was slow and my feet were complaining. I had no shooting pain, so I focused on technique and on reaching the Basilica. The sun set and I turned on my head light as I pressed on. Still raining. 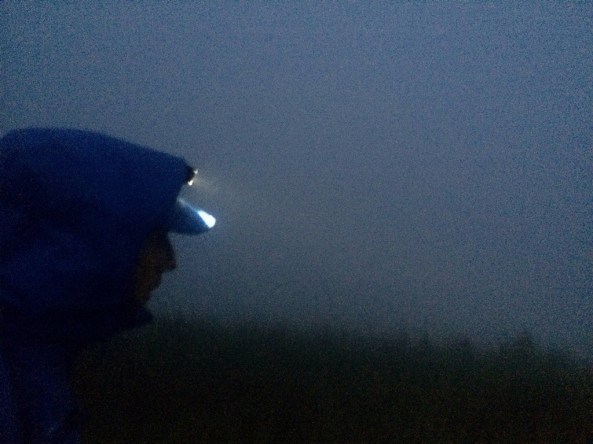 I passed through the last village on a hill where I stopped for a quick coffee and a bottle of water at a bar. Yet again, lovely people and the cheered me on. I was close now, 4km. It was cold and as long as I moved I was fine.

I entered the city, followed the shells engraved in the pavement. Right by the old town I met Sabrina, who had backtracked the shells to meet me. It was great to have a welcoming committee come and meet me! Extra energy again, one more kilometer to go! 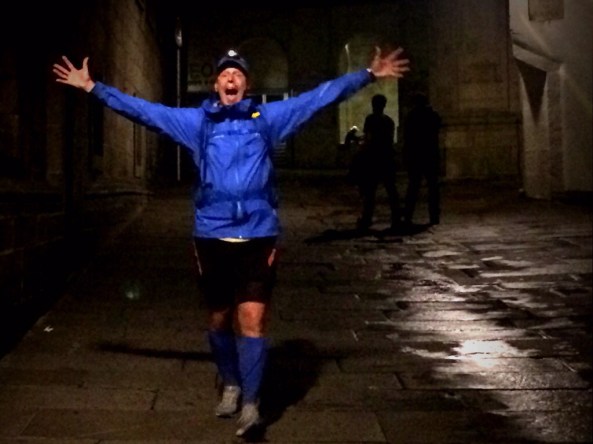 We walked together and I know she asked me many things, but my brain was not responding. I was just focused on getting to the plaza in front of the church where I could shoot of the last satellite position from my satellite tracker on top of the backpack.

We reached it, I sent out my position, verified it was received and The journey from Oviedo had come to a close. 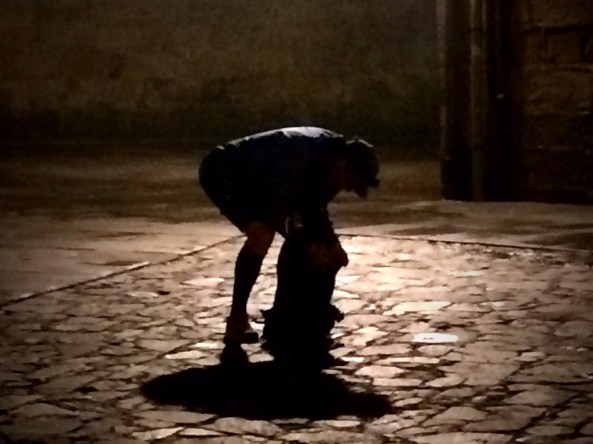 A total of 330km and 8 300 height meters in eight days. Still have a hard time believing it. So many impressions, encounters and experiences. 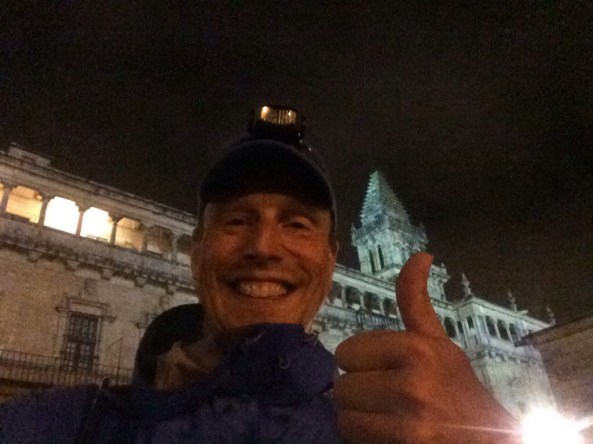 We went to a restaurant nearby for something to eat, drink and to celebrate the completion of the adventure! I entered with the gear on, but i can assure you that hat and lamp were removed shortly after this picture. 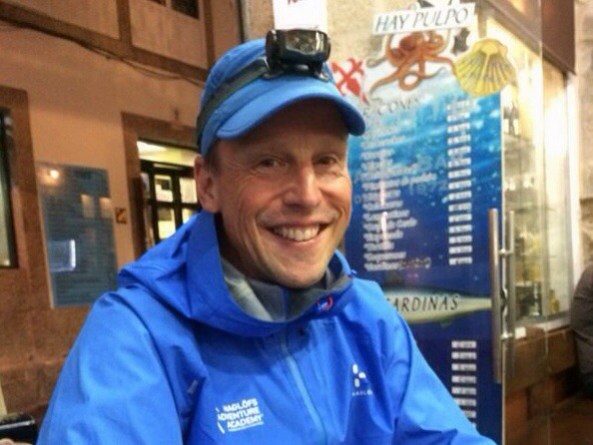 I am not sure what I drank, but Ido remember the dish, yum! This concluded this day before a night of well deserved rest. Thank you all for support during the day and all encouraging messages! 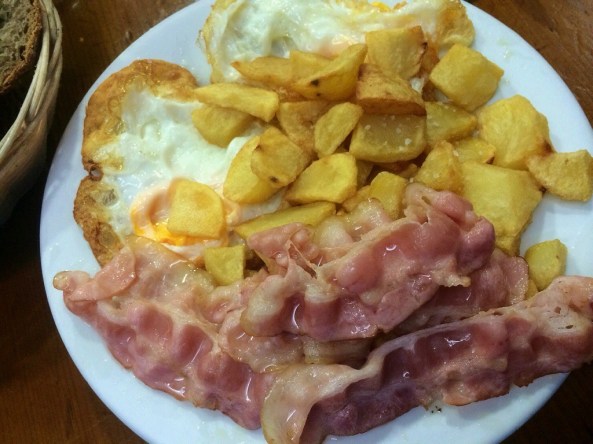